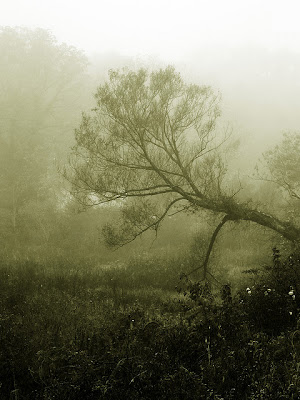 Its a beautiful haunting image and makes me remember my father who passed away 18 years ago.
All my education about trees came from him.
His favourite was the Oak tree he liked their majesty.
This is less a work of fiction than a reworking of old memories.

My father planted trees when he was a young man. Before he married my mother and began that battle of wits called marriage. And before I or my siblings came in to this world. He planted majestic Cupressus Macrocarpa (Monteray Cypress). We always called them by their latin names because we didn't know they had another name. To us they were always there, tall, dark and brooding like Heathcliff. But where he planted them the soil was shallow and one night a storm tore one of them from its anchors and it stretched accross the rock and out into the air horizontal like a giant green arm pointing to the sea.
The tree had been planted to give shelter from a sharp south west wind that ran along the mountains and landed against the westfacing wall of our home. Severe gusts would make the lino rise and that bubble of angry air would run along under the floor covering making us all squeal and think of ghosts and banshees.
I think it was an excuse for my mother to scare the living daylights out of us. But usually it backfired cause no one would venture up the stairs at bed time when all the light and heat was downstairs by the old stanley stove.

That west wind could be very determined driving rain in horizontal sheets into the walls of our house so that eventually it would find the crack on the chimney. Then it would gather soot and travel down and in the morning before breakfast a river of black water would be running across the kitchen floor. Those mornings my mother resembeled a banshee more than any rogue wind travelling in under the floorcovering.
She would get old rags and cups and bail the black strong smelling water into a dish all the while keeping up a monologue of how awful her life was. As kids we knew how to act out our parts "say nothing and argue nothing"
Aren't kids amazing!
They just know how to be invisible when they have to.

One day when I was collecting the calves from a field near our house I notice initials carved into a tree. They were the same as my brothers so I assumed it was his handy work but when I mentioned it to my father that evening he smiled and said no "if you look again you will see 1938" is carved next to them". Well I was none the wiser so he said his brother my uncle had carved his initials there before he left for the states. He went to live in Boston and he never came back to Ireland.
He died some years back.
I never met him.
I often wonder what he was like.
Posted by BJ Kerry at 12:11 PM